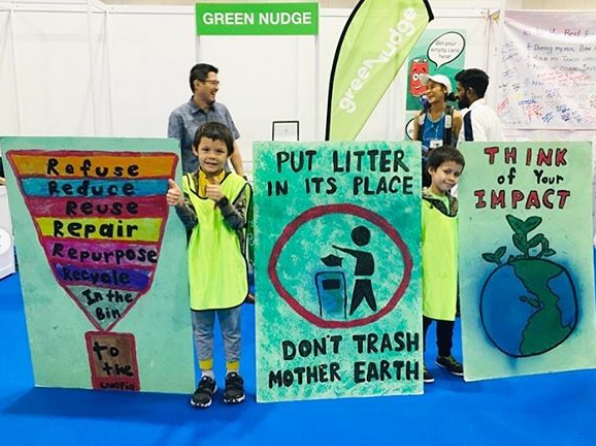 The Singapore Marathon was my last and 10th marathon for 2019…and to get this out of the way – yes I flew from the UK to Singapore on a commercial airline that is supposed to be more “environmentally friendly” – what ever that means (have already written a post on what airlines are trying to do). Yes since trying to get events to reduce waste, I have met both journalist and participants who will pointedly tell me if I fly I am a hypocrite. After having cycled from the UK to Geneva via Trieste, went vegetarian and produced very little waste, a reporter asked me if I ever visited my family in Singapore….. I responded with a disappointed yes. Disappointed because I knew where this reporter was coming from. Of course I allowed him to confirm that I flew to Singapore and let him judge me with his superficial glasses. I voluntarily help events move towards waste reduction for resource conservation. Tell me what you are doing…

So I returned to Singapore to continue leading an initiative that started in 2017, to bring awareness of environmental actions that over 50 thousand participants, volunteers, vendors, sponsors, spectators and organisers could easily blend in as part of their living actions to reduce their environmental impact. Alternatively I could have said “screw it” especially when there were obstacles to move forward from all parties. But with the same determination that saw me cycle 2,500 miles to participate in 2 running events this year, it was important to stay focused on our planet and to continue the ground up movement + zero waste education in a society that can change quicker than other societies in our world. After all we are Clean Green Singapore. It’s time to have a Clean Green Marathon.

In 2018, Singapore declared the year of climate change and in 2019 the year for zero waste. The education is fragmented with many thinking its just about the plastic straws or the plastic bag. Zero waste goes beyond the single use plastic….. it is about the reduction of fast fashion & single-use anything to improve our environment and conserve resources for our future generations.

Large sporting events are an example of needless ostentatious waste with resources going in to produce thousands of stuff for the sake of stuff and to pamper to our feelings of entitlement. A shake up is required – just like when you pack a bag for holiday that becomes bloated with stuff, it becomes necessary to evaluate what is necessary and what is a “nice to have”. Large mass sporting events like the Singapore Marathon need to do the same.

So why join a sporting event in the first place? Sporting events help improve self worth and confidence. Joining an event helps a person complete a distant that non-runners would exclaim in disbelief “why run a marathon? Siao ah!” (Siao=Crazy). Aiming for that event becomes a journey in self actualization, redefining one’s own abilities & what one thought was a limitation. Speaking for myself, the marathon and ultra marathons have taught me perseverance and certainly helps me when am feeling overwhelmed in work and life. The personal best time (PB) is really only a part of that journey which has far too much emphasis by too many who declare themselves as serious runners, but will have the same medal as me. Guess I could boast about my PB on my epitaph…

It is great to have a time awareness as part of that challenge, but in today’s environmental awaking, a great ambassador of the sport will demonstrate responsibilities to the well being of their fellow athletes and can help address environmental concerns.

Hence over 50 eco-warriors helped me to execute plans that had been developed in the months prior. Am thankful for their flexibility, readiness, and enthusiasm to inspire others to take action.

Runners and athletes came forward to speak about their experiences

Volunteers stood with me for 3.5 days at the expo to challenge and encourage runners to agree to “Bin Their Trash During the run” and to make a green pledge or suggest an action that all runners could take to create a more sustainable run. Green should be the norm at all sporting events.

Printatease came on board to sponsor 50 prints of a logo to remind runners to Bin their waste during the run.

Having requested to the green ambassadors that we all try to go low carbon over the 5 days of the event in what ever capacity we could, I cycled out and back to the expo, which equates to about 12-15km each way. Except on the 30th November when a bad night left me with migraine and had thrown up whatever I tried to eat. Would have been great to stay at home but my volunteers were at the expo engaging participants to create environmental awareness, so took a train. Was so happy to see Selina at the expo calling out to participants to create a clean green marathon event.

We gave the green ambassadors shifts, and despite completing their shift, they often stayed on to help prepare for the next stage every day. On Saturday 30th Nov, at 12pm (when the expo closed), six volunteers helped pack up and sent me in a “grab” car to transport the heavy bulky items over to the F1 pit. Selina volunteered to trolley the rest over to the F1 pit (about 1.5km away). Thank you again to Selina for her eco-consciousness. Next time we will trolley / carry all to the F1 pit as part of our bold actions.

At the athlete’s post event village, F&N and Veolia had created sign boards for us for the separation of the waste.

These needed to be moved into better positions and volunteers helped remove many of the general waste bins including 2 large containers that had been standardised in previous events. It was important to believe that most participants would do the right thing and be conscious enough to put their rubbish in the bin. Our assurance was 12 banners filled with green messages at the expo.

Additionally it was important to work as one team with the waste management company Veolia. They would be supporting our efforts this time round, but am hoping they take over directing participants to put their rubbish in the right bins in future editions.

And to see if we could make a difference at the hydration point, 2 volunteers were deployed at the 4km hydration point. I wonder if Sharon Tan (National Women’s Winner) had taken note as she passed.

At the pre-event village the team swirled around with signs, calling for participants to take a green stand with us.

Charlotte Mei intercepted me to have an interview and grateful for the opportunity to voice concerns. (see previous post)

I tried to get my eco-warriors into the Starting Pens to remind runners to be mindful of their of the rubbish they generated. Unfortunately we were told that could not happen this time, so we complied..

I entered the pen mentally and physically fatigued from the last 3.5 days and became the tired lady. As I sat in the pen, bemused runners spoke to me about what the tyre was all about. Of course if a lady could put her rubbish in the bin, what about you?

There were no Emcee announcements about the waste and just before the start of the event there was a moment of silence. So I yelled out “Remember to bin your trash to keep the course safe and clean for all runners”. It would be so great if an announcement in all languages could be made before the run.

I could only run until about 7km. The humidity was high but truly the weariness of the weeks leading to this event had caught up and both the physical and mental were in sync. The only thing that would keep me going is the spiritual to see the world be a better place. A couple of guys came to my aid who first tried to help me pull my tyre and ended up carrying it. One of the guys, Mark, took a cup from the hydration point and then threw it on the floor. I asked him why he did that. He responded “one cup doesn’t make a difference”…..I went into lecture mode “when everyone says that, it’s a big mess…. one less cup on the floor from each runner makes a huge difference to the runners who are behind”.

I yelled out at many hydration points for runners to think of runners behind who have to run through that trash and to put it in the bin. Runners applauded and agreed, other runners showed me they had brought their reusable cup / bottle. To all those runners, you helped me keep going.

At about 8km the first half marathoner Prashan D. Silva finished. By 10km, the team back at the post event village were receiving a steady stream of participants and guiding them to bin their waste properly. This would allow us to repurpose the cans, bottle caps, towels, and banana skins. Volunteers went even further to ensure drinks were empty before disposal, and when the wrong stuff was thrown in the wrong bin, they got their hands dirty and pulled it out to put it in the right bin.

At about 13km, Joshua Kipkorir was the first man to finish the marathon. By 14km, Priscah Jepleting Cherono was the first woman to cross the finish line and I was on the West Coast Highway. It was a mess, with runners balancing items on the bridge as well as tossing stuff into the drains. However it was still better than in previous years prior to 2018 when there would have been a carpet of stuff on the floor.

At 20km, I looked longingly at the 1/2 marathoners finishing their stint. Some folk wanted to help me with my burden and I was happy to give them Tring (my tyre)….after barely a minute they returned Tring back. At 21km Sanjay, an Indian Filipino sang songs of happiness with me. We were trying to gee up the death walk around us. Somewhere I lost him between 25-30km. It should be noted there was plenty of entertainment (cheer leaders, indian dancing, elvis/michael jackson impersonations and more) on course and amazingly there were still performers continuing past midnight to keep the participants’ minds off their own physical suffering.

At 25km, the next shift of volunteers came to take over to do the late night shift (10pm-3am)

At about 1am I caught up with the rest of the team….and surprised to see runners everywhere. At the end of the event in the event village there was some trash on the ground, but the majority went into the bins.

Went to sleep for a couple of hours whilst the third shift made their way over to the event village for the start of the 10km and I returned for a 5km stretch out.

…and so the final fruits of our labour

Week 3: H’s journey to #Ride a #Bike
Second week of #learning how to #cycle. H learned about how to change his gears and hand signals. Next week will take him into a quiet estate 😀